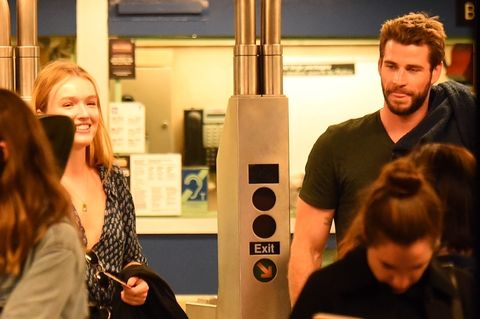 Who is Brown? A CW actress famous for her role on Dynasty with over 452,000 followers on Instagram who has been working in the acting and modeling industries since she was a kid. Here, what to know about Hemsworth’s potential new girlfriend.

TMZ has photos of them showing PDA in West Village and eating at Sant Ambroeus. They were also photographed taking the New York City subway, as seen above. You know it’s real when you take public transportation together.

It’s unclear at this point how long they’ve been seeing each other. Us Weekly was told by a source earlier this week that Hemsworth “hasn’t been dating anyone, [but] he’s open to meeting people.”

Brown is a model and actress who has been working in the industry since she was a kid.

Her biggest role so far is as Kirby Anders on the CW’s rebooted Dynasty. But prior to that, she was in Strangerland with Nicole Kidman and played young Anna Marcy in the Australian series The Kettering Incident, according to her IMDB. Her first role was in the 2004 TV movie Go Big when she was just six.

In 2014, Brown told i-d that acting was her first passion: “I see myself as an actor, I did it before I did modeling. I felt like it was always something I wanted to do.”

“Acting is more challenging,” she continued. “It’s easier to say I’m better at modeling but the process is different. The preparation for acting is insane. With modeling you just do castings and stand there and leave. Acting is such an emotional investment. I hope I’m good at both. Modeling is less emotional effort.”

Brown considers Sydney her home but she is shooting Dynasty in Atlanta now.

She has also lived in Los Angeles and New York City. When she was asked during her September 2019 appearance on Yahoo Australia’s Build Series about her recently moving to LA, she explained, “We actually shoot in Atlanta. I’m based in Atlanta. We shoot from July to April, that’s the season. When I got the show, I was in Sydney.”

“Sydney will always be home,” she added. “It’s hard to leave every time I leave. I don’t want to.”

Brown has said she isn’t seeking fame as much as she’s trying to just act.

In an interview with Vogue Australia last October, Brown explained, “I don’t know if anyone really….signs up for a show thinking that they’re going to become really famous. That’s something that I haven’t thought too much about, I’ve just been focusing on doing a good job and being present in the moment, and whatever arises, I’ll take it as it comes. But I’ve not been worrying myself too much with that.”

Brown described herself as a “responsible” teen who avoided partying to pursue her modeling and acting career.

Classic teen rites of passage, like house parties, didn’t hold much appeal to her. “I’ve lived overseas on my own so I haven’t had the bond of the parents going away meaning a party,” she explained. “I remember the first time I went overseas on my own my agent said, now don’t get into the partying. And I was just like, trust me it’s not going to happen.”

She echoed this in her September 2019 interview, explaining, “When I started modeling when I was 13, it was like, yep, this is it. It took over everything by the time I was 15. So when I was 16, nothing was going to get in the way of me doing it. And I am very, very driven and very responsible because I’m like it serves what I want longterm, [which] is a good career. So at 16, I was very responsible and I was not like a naughty kid by any means.I was like straight A student, did by everything by the book, was petrified of ever doing anything wrong ever. God forbid I’m not perfect. ”

Come for the photos, stay for the witty captions.

Brown is into astrology and is a Taurus who strongly identifies with her sign.

“I’m a Taurus sun, Scorpio moon, Virgo rising,” she told Yahoo!’s Build. She explained how the sign’s traits match her own personality: “Well, Taureans are very stubborn and blunt. You know how we feel about something. We’re a hot mess [but] you always know where we stand. But also [we’re] like homebodies, yeah. Love a nest, love an investment piece.”

She also later conceded that while she’s very into people’s star signs, she is fully aware horoscopes could be BS. “Maybe it [astrology] means nothing and I’m wasting all my time and I’m fully prepared that that’s a reality,” she quipped.

Brown grew up in Sydney and was recently a bridesmaid in her sister’s wedding.

Brown promoted Dynasty ahead of the wedding with a very sisterly caption: “Dynasty is on NOW! I can’t watch it yet because I’m in Australia where my sister @nickigabriel_ is getting married in 3 hours which is.. exciting I guess,” she wrote. She told Yahoo’s Build series that she has two older sisters and was raised in Sydney.

Brown has an adorable dog.

She listed “my dog and Australia and food,” as the things that make her happy during her Build interview. And understandably: the dog made several cameos on her Instagram: