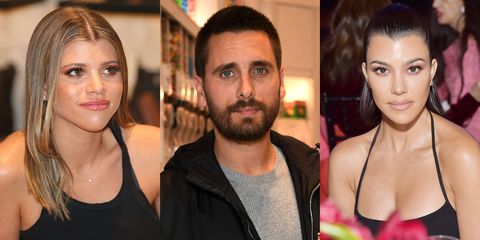 Keeping Up With the Kardashians gave an up-close and unprecedented look at the dynamic between Scott Disick, his ex-girlfriend Kourtney Kardashian (who is also the mother of his three kids), and his new girlfriend, 21-year-old Sofia Richie. Richie just made her debut on the show and allowed herself to be filmed during the family vacation to Finland that she joined Kardashian, Disick, and their children on.

Disick said in a confessional that while Richie has traveled with the family before, it can be a weird dynamic. “I never want to miss out on anything when it includes the kids,” he said, addressing why he wanted to go on the vacation, via People. “The past six to eight months, we’ve been on a couple trip where it’s been Kourtney, Sofia, the kids, and it’s been great. But Sofia mentioned to me that she feels a little left out so I have to be careful not to overstep anyone’s boundaries and make anyone feel left out.”

Having Richie on camera too also changes things, he added: “Traveling with a family like this is a unique situation that not everyone does. I definitely think this trip, out of the other trips we’ve been on, has a little bit more pressure because the truth of the matter is, there are camera crews everywhere,” he said. “Tons of people walking around that Kourtney and I have known for over ten years. Sofia has never really done anything like this before. It’s hard. I don’t want her to feel out of place, I don’t want her to feel like she’s not as comfortable as I am. I’m just trying to be cautious of everyone’s feelings.”

That’s when he confessed that he wasn’t sure how to act in front of Kardashian when Richie was there too: “Sometimes you have so many inside jokes or inside things with somebody you’ve known for so long, even if you’re not romantically with them, you don’t really know how to act. It is definitely a really hard and awkward situation, and I just feel bad. At the end, I want the people I love in my life to be happy.”

Disick eventually spoke about this feeling to Kardashian, who understood and offered to call Richie to make sure she felt comfortable before the trip. “I think you put so much pressure on things to make everything perfect,” Kardashian told her ex-boyfriend. “I don’t even mind if you [and Sofia] go off and do your thing, but if you’re in it, let’s enjoy what’s happening.”