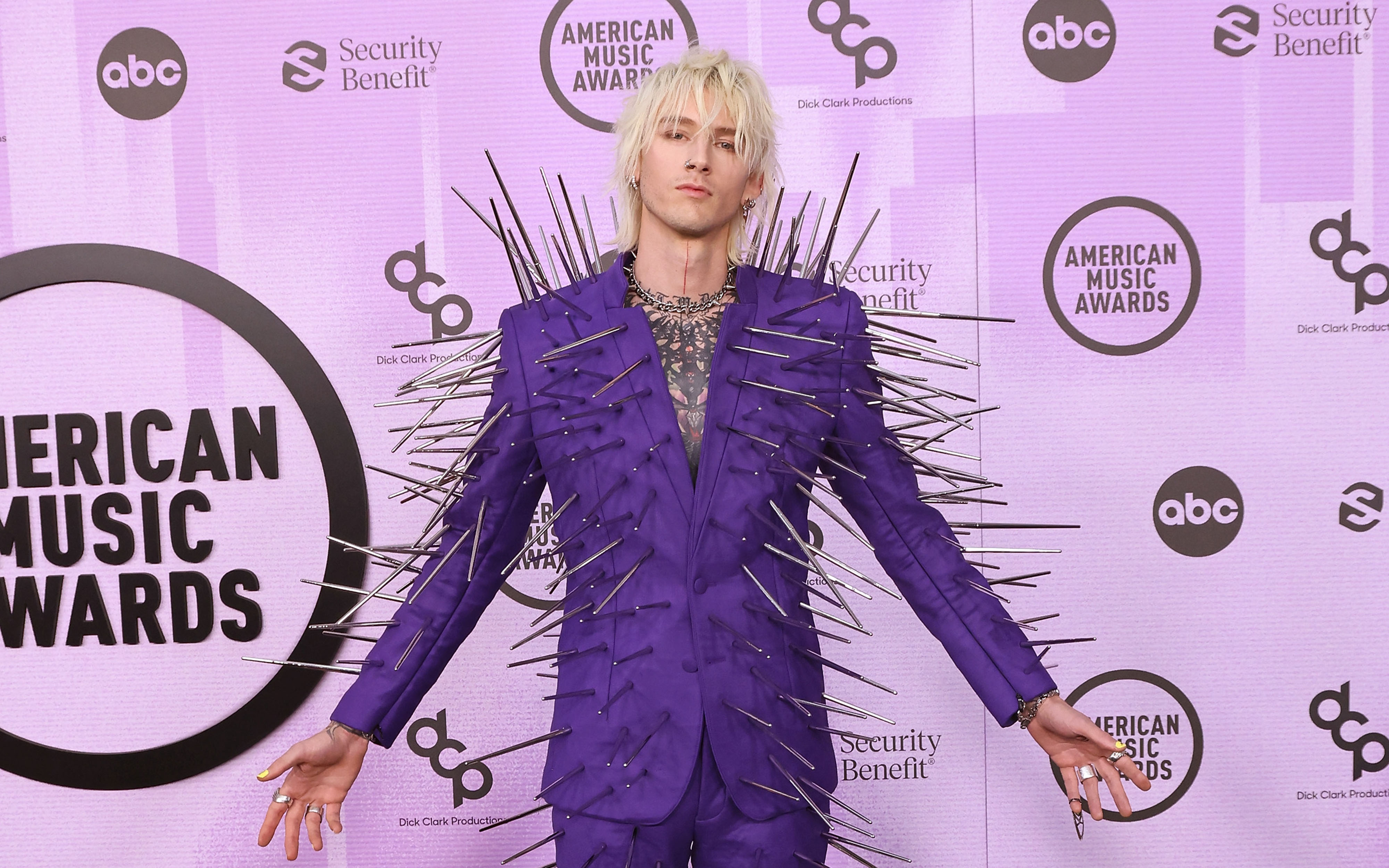 MGK, we’re looking at you.

Remember when famous folks wore curve-hugging mermaid gowns on the red carpet and you wondered how the likes of J.Lo and Salma Hayek ate, laughed or peed in the skin-tight garments? I recall learning that A-listers sometimes ride standing up in massive sprinter vans en route to the Oscars and Met Gala to prevent wrinkling their dresses and thought it was delightfully absurd. Those were simpler times, friends.

In recent years, celebrity red carpet outfits have tipped the scales from “impractical” to “life-threatening.” An obvious celebrity-who-never-pees-at-events is Kim Kardashian, a woman known for choosing a sartorial moment over life’s most basic bodily functions (like breathing?). There was the vintage latex Thierry Mugler at the 2019 Met Gala, so snug it sparked a problematic rumour she’d had ribs removed to get into it, the full-body unitard made of stiff caution tape at the Balenciaga winter 2022 show in Paris, and of course, the several-sizes-too-small archival Marilyn Monroe dress worn at the 2022 Met Gala. As far back as 1998, Rose McGowan wore a sheer chainmail dress to the VMAs with nothing more than a dozen crystal chains across her bare derriere. Imagine the indentations you’d get if you sat down for even five minutes in that?

Most recently, Machine Gun Kelly wore a potentially organ-damaging ensemble at the 2022 American Music Awards that’s giving high-fashion Hellraiser. The “Favourite Rock Artist Award” accepted his trophy in a a custom amethyst wool suit embellished with long gun metal spikes from Dolce & Gabbana. (And yes, the suit was completely covered in the approximately eight-inch spears, including the buttocks area on which a person would normally pop a squat — see below.)

At this point, I don’t know whether to be concerned about the well-being of these celebs or impressed by their savviness — maybe they don’t want to sit down for the full event and choose outfits that prevent them from doing so. “Sorry guys, I’d love to stay for all four hours of the show, but I can’t sit down without risking my life. Do you have an ambulance on standby?” It’s actually pretty genius.

MGK isn’t necessarily known for his sensible fashion choices, with red carpet looks that have included chaining his fingernail to that of his fiancé Megan Fox and painting his tongue black for their requisite tongue-kissing photos. An element of silliness is part of what often makes celebrity carpets fun — the outfits that border on ridiculous or subvert expectations are often the ones we remember, for better or for worse. There was Björk’s swan dress to the 2001 Oscars, a look that was panned at the time but is now, more than 20 years later, considered iconic. Who could forget (even if we wanted to) Lady Gaga’s health and safety violation of a meat dress at the 2010 MTV Video and Music Awards? One could argue that while some of the most memorably wacky red carpet moments are performance art, the ones you tend to roll your eyes at feel more like stunts. Ultimately, they’re two sides of the same performative coin — they make you look, and talk.

Did MGK’s weapon of fash destruction set tongues wagging? Sure. Will the look go down in fashion history as groundbreaking? Probably not. I just hope his assistant packed Band-Aids.